4 ways choosing the wrong influencer for your event can BackFYRE 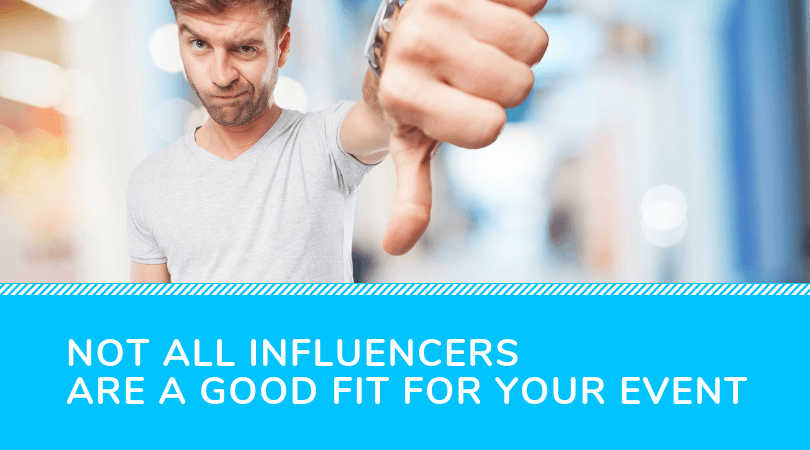 We’re going to come right out and say it: not all influencers are a good fit for your event influencer marketing campaign. It’s difficult to find influencers outside of your event that you can trust.

Being a social media influencer is a great privilege – how often does a person get the chance to represent a brand? But this privilege comes with serious responsibility. Any potential influencer must be trustworthy, professional, and authentic. Read on to discover 4 ways an influencer can be a bad fit for your event and learn how to find influencers that are worth your time.

When trying to find influencers, you need to have an understanding of their worldview: how politicized their messaging is, what kind of subjects they are known to have an interest in, and what their reputation is in the community. These things matter more than their follower count. Notoriety is a double-edged sword. On the one hand, securing a high-profile influencer for your event is a major score (so long as their followers are part of a relevant target demographic). On the other hand, if they are a polarizing figure, or prone to having lapses in judgment when they post and comment, their endorsement becomes a burden instead of good publicity. This pitfall became all too real for brands that backed YouTube personality Logan Paul in 2018. When Paul posted a video of what appeared to be a suicide victim in Japan, he became public enemy number 1. PewDiePie, another YouTuber, faced similar controversy when his sometimes racist humour was scrutinized by media outlets. Content creators like this are not professional broadcasters, and therein lies the problem. They can say what they want when they want in the uncensored and rambunctious space that is social media.

These additional examples of influencer disasters are good to keep in mind as you search for your next ambassador.

When a potential influencer’s account looks too good to be true, it probably is. If you see nothing but generic and inoffensive content, a huge following, and inflated engagement numbers, you may be looking at fraud. Many robot accounts exist that mimic the actions of a real user, making it hard for you to properly find influencers. Users can also make use of automated services that post, follow, or engage with others automatically in a bid to maximize their success. To take it a step further, cash can be exchanged for likes to inflate perceived engagement. Another well-known tactic, known as follow-for-follow, allows for a high follower count only because every person followed by the account gets followed back. You can tell if this is happening by checking to see if the number of accounts the person is following is in the same range as their follower count.

Many wanna-be influencers are seeking the fast-track to success and will do almost anything to gain exposure. You could always find them jumping on the bandwagon du jour in an attempt to capitalize on the latest trends. Even if they have a niche focus, you end up wondering about their motivations. Do they seem genuinely concerned with helping people in their community, or are they continuously promoting themselves and their own business? A good event influencer is one who has a reputation for being selfless and admirable in their public life, and who would be dedicated to your event’s promotional team. Inauthentic influencers practice bad influencer marketing – they will simply cut and paste your messages out of obligation, without injecting any personality into their posts. They’ll give nothing away without getting something in return – sounds like a bad way to get the ball rolling!

A fiasco of epic proportions, the Fyre Festival in the Bahamas was supposed to be a luxury music festival where attendees would enjoy world-class entertainment in an impeccable setting. But instead of fine local cuisine, an all-star musical lineup, and stylish beach accommodations, delegates were treated to a local band’s performance, FEMA tents, and cheese sandwiches. The organizers, led by 25-year-old tech entrepreneur Billy McFarland, clearly were in way over their heads, and stubbornly went on with the show with the odds stacked against them. One of their half-baked promotional strategies involved enlisting the biggest social media influencers, including Kendall Jenner and Bella Hadid, to promote the event early on. The influencers failed to disclose that they were being paid, which goes against U.S. laws. They simply fulfilled their contractual obligations and posted the message they were provided, which underlines how influencer marketing can really backFYRE when it is treated as a one-sided spokesperson arrangement! Event planners, take note: the best event influencers are ones that are transparent, authentic, and honest. Snoballer-in-Chief Rachel Stephan and other industry experts discuss this case further in Ep. 29 of the Making a Marketer podcast, definitely worth a listen!

4. Does not attend your event

The best way to avoid the pitfalls we listed in this article is to find influencers among the people that have a stake in your event. If a potential influencer has no plans to attend your event, ask yourself why you want them to represent your brand. Why would they actively and enthusiastically promote an event that does not involve them? In most cases, it’s much less risky and less costly to tap into your network of event participants (speakers, sponsors, delegates, etc) and give them the tools to spread the word about their appearance at your event. This is what snöball event influencer marketing was designed for, and it works much better than traditional influencer marketing tactics.

If you want to launch an influencer marketing campaign for your event and find influencers that will work with you, not for you, trust snöball!